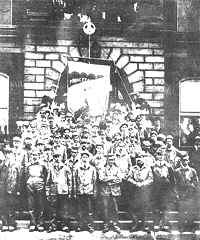 This was 8 years before Labor Day was made an official national holiday in 1894!  To put this date in perspective, the Battle of Little Big Horn, otherwise known as Custer’s Last Stand, had taken place only 10 years before!  That first celebration was very similar to our present Labor Day Celebration. It was sponsored by the Knights of Labor, which was one of the labor groups representing unionists in Indiana. A train from Chicago, Illinois brought four coaches of unionists. They were met at 3:30 a.m. by the Princeton High School Band and escorted to the Princeton Fairgrounds. At 10:00 a.m. another train brought six coaches full of Knights of Labor, along with two bands. A parade, which was the highlight of the celebration, resulted. Speeches were made by area labor leaders, and a tradition was born. A few years later, the annual celebration was held in a small community called Hosmer, Indiana, located on the banks of the Wabash-Erie Canal. In 1899 that small town’s main industry was the Littles’ Coal Mine, whose men were represented by the U.M.W.A. That celebration was referred to, by the Petersburg newspaper, as being the first Labor Day Celebration ever held in Pike County. The next year, 1900, the celebration moved a few miles to Petersburg, Indiana, and it grew several hundred times over what it had been just a year before. The celebration drew between 8,000 and 10,000 people, and a free meal was served to all union men who marched in the parade. Over 1,500 meals were served that afternoon. 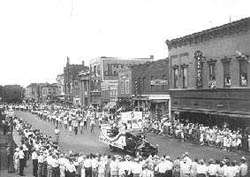 In the years following, the celebration moved between Evansville, Ft. Branch, Vincennes, Oakland City, Princeton, Boonville, Washington, Sullivan and Petersburg in Indiana, Mt. Carmel in Illinois and Henderson in Kentucky. In the late 1920’s the celebration saw a growth that would take it from a local event to a national event. In 1930, attendance atPrinceton, Indiana was over 40,000 on parade day. In following years, that attendance would never drop below 30,000 and would reach its peak of 75,000 in 1949. one international alone had over 10,000 members march in the 1936 parade.

The celebration started drawing national attention in 1931, when a movie company, Fox Movie Town, sent its film crews to Princeton, Indiana. They traveled by train to film the celebration for newsreels. Fox Movie Town was to become 20th Century Fox, and was only one of the many major studios to cover the celebration. Between 1931 and 1949, every major movie studio in the country sent camera crews to southern Indiana to cover what had become
one of the largest celebrations of union labor in the nation.

From 1950 to 1992, the celebration moved between Boonville and Princeton. In 1993, the association traveled to Evansville, Indiana for the first time since 1942.  Some of the local unions that march in our parade today take from past traditions. Some locals elect to make floats and to wear the same kind of shirts and hats in the parade. Some also have banners made up to tell who they are, and some try to get a band to march with them from their home city or area. We get these from our forefathers who would buy new blue jeans, shoes, shirts and hats to wear in the parade…these were called a labor day suit.

Generally, they were put to use the next day at work. In one parade a meatcutter’s union butchered and processed a cow while their float was being pulled along the parade route – this did not become a tradition.

Our celebration has expanded to a 4 day event. We have tried to keep our modern day celebration linked to our proud past by producing traditional events like the parade, gospel sing and Labor Day Battle. The battle is a contest between Association member local unions to see which local can out pull, out shovel, out run and out work all others for bragging rights for the ensuing year.

Our 4 day event is like a county fair, but most of the events are subsidized by a combination of labor unions, businesses and civic organizations. We are able to offer a lot of quality family-oriented entertainment at a very reasonable cost.   We, again will be sending out the call for solidarity to all local unions to gather on Labor Day to honor all working men and women of the tri-state area.  Why don’t YOU join us?