Cecil Edward Roberts, Jr., a sixth-generation coal miner and one of the labor movement’s most stirring orators, became president of the United Mine 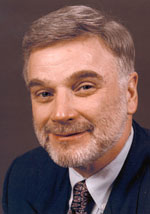 Workers (UMWA) of America on October 22, 1995, having served as vice president of the union since December 1982. Roberts succeeded Richard L. Trumka, who was elected secretary-treasurer of the AFL-CIO.

Born to Evelyn and Cecil E. Roberts, Sr., on October 31, 1946, Roberts grew up on Cabin Creek in Kanawha County, WV. His great-uncle, Bill Blizzard, was a legendary organizer during the West Virginia mine wars of the 1920’s and a UMWA district president under John L. Lewis. Both of his grandfathers were killed in the mines.

After college and military service in Vietnam, Roberts began work at Carbon Fuels’ No. 31 mine in Winifred, West Virginia, in 1971. He worked for six years in a variety of underground jobs including general inside laborer, shuttle car operator, unitrack operator, greaser, beltman and mechanic.

His fellow Local Union 2236 members elected him to the local’s mine, safety and political action committees. He also became active in the Miners for Democracy movement that restored control of the UMWA to its membership in December 1972.

In 1977, his local elected him a delegate to the District 17 convention, where he chaired the constitution committee. The same year, he was elected vice president of District 17 by a 2-to-1 margin. In May 1981, he was reelected without opposition.

On November 9, 1982, Roberts was elected vice president of the UMWA, again by a 2-to-1 margin, running on a slate headed by Trumka and including John J. Banovic, who was elected secretary-treasurer. The Trumka – Roberts – Banovic team was reelected without opposition five years later.

In 1989, Roberts was the “on-the-scene” leader and “day-to-day” negotiator in the UMWA’s militant 10-month strike against the Pittston Co., which had cut off health benefits to its retirees and was trying to walk away from its obligations to the UMWA Health and Retirement Funds. For his role in that successful strike, Roberts received the Rainbow Coalition’s Martin Luther King award as well as awards from Citizen Action and the Midwest Academy.

On November 10, 1992, Roberts was reelected by an 80-percent margin to his third term as vice president. Trumka was reelected president and Jerry D. Jones, secretary-treasurer.

In August 1997, Roberts was elected by acclamation to a new, five-year term, winning the support of 99 percent of the locals participating in the union’s nominating process. He is once again joined at the union’s helm by Vice President Jones and Secretary-Treasurer Tarley. Also of note, for the first time in UMWA history, the entire leadership team’s slate, including tellers and auditors, ran unopposed.

In addition to serving as UMWA president, Roberts has also held office or worked on behalf of several other organizations over the years, including serving on the Committee for Employer Support of Veteran Employment and the West Virginia Employment Opportunities and Economic Development Commission. In 1985, he was elected president of the National Council of the Holmes Safety Association. He has been elected General Vice President of the National Council of Senior Citizens by their Executive Board. He has also been appointed to serve as a member of the West Virginia University Institute for Labor Studies and Research Advisory Board in 1996 and he is a member of the American Legion, and a lifetime member of the VFW.

In 1996, he reopened the UMWA’s National Agreement for the first time in the union’s history and made significant improvements in the wage agreement.

In 1998, he negotiated a new National Agreement that was ratified by the highest percentage in the Union’s history.

Roberts is married to the former Carolyn Sue Stewart. They have a son, Kyle Edward, a daughter, Melissa Dawn, two grandsons, Aaron and Brandon and one granddaughter, Savannah Rose.